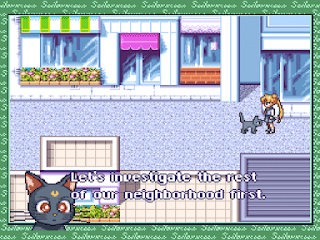 Genre: Role-Playing (RPG)
Perspective: 3rd-person, Top-down
Art: Anime / manga
Pacing: Turn-based
Setting: Sci-fi / futuristic
Published by: Bandai Co.
Developed by: Angel
Released: 1995
Platform: Super Nintendo (SNES)
The game is made according to the cartoon series familiar to everyone, but the plot here is completely new. In other words, the game is a kind of sequel to the animated series with a new plot and many familiar characters. Something was also borrowed from the manga.
If you focus on the animated series, then the plot of the game begins its development somewhere after the 3rd season. In principle, the essence of the plot can be learned from the long initial intro. However, I will still tell the vrattse about the plot. In short, in Crystal Tokyo of the future, a new team of sailor-wearing warriors, the opposite of the familiar Sailor Senshi team, called the Oppositio Senshi, appears. The team members are called Sin, Nabu, Nergal, Marduk and Ishtar. Each of these "new warriors" is in direct opposition to the strength and actions of true sailor warriors. The evil team formed was a mysterious villain named Apsu. With their powers, the new villains intend to warp time and change the fate of Tokyo and the entire Earth. Through space and time, they just penetrate into the present. And the true warriors-in-sailors are on the alert and begin to suspect something is wrong: demons appear around the area, and then no one knows where Chibiusa disappears...
In general, it is better for you to follow the plot yourself, because it is really very interesting and unpredictable. I can only say that it will revolve around the Silver Crystal, which the Oppositio Senshi intend to get by all means. And along the way, you will find many unusual plot twists.
In the game you will meet all 10 characters that were in the cartoon (Sailor Stars does not count): Sailor Moon, Sailor Mercury, Sailor Mars, Sailor Jupiter, Sailor Venus, as well as Sailor Uranus, Saillor Neptune, Sailor Saturn, Sailor ChibiMoon and Sailor Pluto. Each of them will have their own abilities, familiar from the cartoon, plus some new ones. Various villains are also waiting for you: many of them will be familiar to you from the cartoon, while others will be completely new.
The gameplay is built like in any classic role-playing game of those times, i.е. with a top view. You will run into enemies automatically. Battles take place in the classic (turn-based) mode - from the side view (this view is familiar to all fans of the Final Fantasy or Lunar series). During the battle, you choose the desired action (normal attack, magic attack, or defense in general), after which, during the next turn, an alternate (turn-based) exchange of blows begins. The leveling of the heroines is relatively fast. You can equip them with special amulets that increase attack, defense, speed, etc. (at the beginning of the game, all this can be bought in the OSAP store). Also, during the game, the heroines will be able to use joint techniques, and later team super techniques. As for joint techniques, you will have to “open” them yourself (in the menu).
The graphics in the game are top notch. The sound design didn't disappoint either. Also, you will find a lot of dialogues and humor familiar from the cartoon.
What else can be said here? This is just a cool RPG and one of the best Sailor Moon games in general! Recommended to all JRPG fans and fans of the animated series.
‹
›
Home
View web version