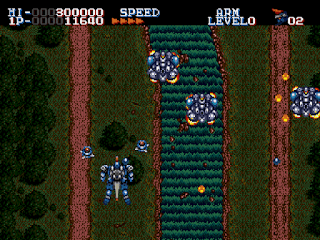 Genre: Action
Perspective: Top-down
Visual: 2D scrolling
Art: Anime / manga
Gameplay: Arcade, Shooter
Setting: Fantasy, Sci-fi / futuristic
Published by: Tengen Inc.
Developed by: Compile
Released: 1993
Platform: SEGA CD / Mega-CD
The game has a rather unusual plot as for Shoot'Em Up, it would be more suitable for an Indian film, not only does the game take place in feudal Japan, but you still have to take control of an eight-meter steam robot, the so-called Aleste mech. You have to play as Kage, the only survivor of the Oda clan. Destroyed by the "Demon King" by the robot ninja Nobunaga, also known as the White Fang. Further, the plot is more complicated than in Indian cinema. But in the end, you even have to visit another dimension to stop the demons and their leader. In the game you have to fight the leader (boss) at the end of each level. You will also have a small variety of weapons.
‹
›
Home
View web version