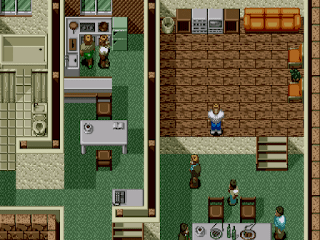 Genre: Action, Role-Playing (RPG)
Perspective: Bird's-eye view, Side view
Visual: 2D scrolling
Art: Anime / manga
Setting: Sci-fi / futuristic
Published by: SEGA Enterprises Ltd.
Developed by: SEGA Enterprises Ltd.
Released: 1991
Platform: SEGA Genesis / Mega Drive
Taro Yamada is a young man who lives in the suburbs with his parents until one day, when a strange package containing a superhero costume was delivered to his house by mistake. He dons a costume to entertain some of the guests, but soon discovers that he is indeed giving him superpowers when he accidentally sends his father flying through the wall.
Turns out it's the Rent A Hero battle armor that lets anyone become a hero! He is allowed to keep it for himself, but there is one catch: he has to pay the rent. Of course, SECA, the armor company, also employs its tenants, and they pay well if you're good enough.
It is an RPG game in which the player has to make a living as a hero part-time by earning odd jobs. While these quests start out as simple as delivering items and running errands, they end up with gang-fighting, corrupt businesses, and a city-wide conspiracy.
The player explores Aero City from a top-down view filled with shops, houses, and people to talk to. However, the battles take place in the form of a sequence of actions with a side view. When a player has combat armor equipped, its energy is depleted until it is eventually disabled, but it can be recharged by purchasing new batteries from the store.
‹
›
Home
View web version