Record of the Bahamut War (SEGA) 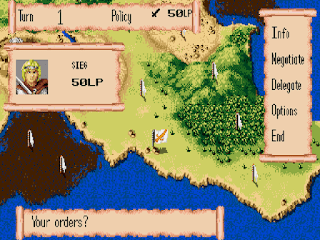 Genre: Strategy / tactics
Perspective: Top-down
Pacing: Turn-based
Gameplay: Turn-based strategy
Setting: Fantasy
Published by: SEGA Enterprises Ltd.
Developed by: SEGA Enterprises Ltd.
Released: 1991
Platform: SEGA Genesis / Mega Drive
This game is very similar to the Asterix game for PSX. The combat system is vaguely similar to the combat system in Heroes of Might and Magic. The plot of the game tells about the eternal war on the continent of Bahamut. You must make a choice for whom you will fight, it depends on your choice whether the light will win or the forces of darkness will forever reign over Bahamut.
‹
›
Home
View web version