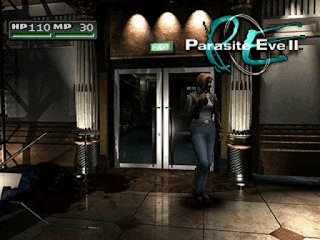 Genre: Action, Role-Playing (RPG)
Perspective: 3rd-person
Gameplay: Survival horror
Setting: Sci-fi / futuristic
Published by: Square Electronic Arts L.L.C.
Developed by: Square Co.
Released: 2000
Platform: PlayStation (PSX, PS1)
The game has taken a big step towards action. The battles take place entirely in real time, the battlefield has no conditional restrictions, representing all the available space without the "invisible walls" from the first part. Often during a fight, you can escape by simply leaving the current zone, and besides, many fights are optional. Dodging has become more difficult. Aya can move back and forth and turn. Thus, it is impossible to simply step aside at any moment; it is desirable to be constantly on the move.
You need to aim at opponents with a special button. As a rule, Aya looks towards the target, but if it moves too quickly, or Aya herself changes disposition (for example, while dodging an enemy attack), then the heroine will take some time to turn in the right direction and take aim.

The weapon system in the second part is well developed. There are not so many types of weapons as in the previous game, but they differ greatly from each other - not so much in terms of indicators, but in firing modes, available improvements (like a grenade launcher or a flash that blinds opponents), etc.
Armor now does not provide protection - moreover, there is no such concept in the game at all. The types of armor differ in the amount of added HP and PE, additional properties such as immunity to certain status effects, as well as the number of active slots. The latter is especially important, since there is no direct access to the inventory during the battle. You can use only those things that are placed in active armor slots. It should be noted that there are several items in the game (many of them are well hidden) that give unique bonuses when placed in active slots.

The magic system has been changed to match the combat system. Some abilities require guidance - this is not very difficult, since the game will show the trajectory and area of ​​damage before launching. Activating the abilities takes some time, during which Ayu can be interrupted by any enemy attack. Also, any magic can be improved by increasing the level. This requires EXP points. An important difference from the first part is the lack of PE (Parasite Energy) regeneration during the battle - a certain amount of it, depending on the types of defeated opponents, is issued only after the battle.

Three years have passed since the events in New York. Aya moved to Los Angeles, where she joined MIST, the secret department of the FBI. Suddenly, a call came in that terrible events were taking place in the Acropolis Tower. Arriving there, Aya sees the killed SWAT members. She soon finds the first survivor and sees her transform into a Neo Mitochondrial Creatures. This is how mitochondria reached humans, because earlier only animals were infected. Aya's partner Rupert arrives and says that the building is mined by a member of the SWAT squad. Aya finds out who it is - this is a certain creature named No. 9. The building explodes, and Aya and Rupert manage to fly away by helicopter.

The next day, a call comes in about strange incidents, but this time from the Dryfield Motel. Dryfield in the Mojave Desert, Nevada. There, Aya finds a girl who, like the girl in the Acropolis Tower, turns into a mutant. Then he runs into the last resident of the motel, an old military man named Douglas and his dog Flint. Douglas tells her about a strange entrance to an old and abandoned mine. Aya continues to explore the surroundings of the motel and meets No. 9. After the battle, he spontaneously ignites, and Aya loses consciousness. When she regains consciousness, she finds a man named Kyle Madigan in front of her and tells him about the old mine. They decide it's time to leave, but it turns out to be impossible as the Scavenger monsters have destroyed her car. Aya and Kyle ask Douglas for his car, but he warns them that there is no gasoline. Aya finds him and goes to bed, tired to death.
She wakes up at night and goes to the shower, but she hears terribly loud steps. Going out onto the balcony, she sees a huge monster breathing fire from its mouth. After a long fight, he dies. Aya and Kyle leave for the mine, saying goodbye to Douglas and Flint. Upon arrival, Kyle is injured, and Aya, fighting off the monsters, asks him to take refuge in the mine. After destroying them, she follows Kyle, but soon encounters a huge horse monster, in whose body she finds Kyle's pistol. Aya decides that Kyle is dead. In the mines, she finds the entrance to the Vault ...

Shelter is a large and secret underground complex in which ANMC creatures were created. There was also created NeoArk - a sector-simulator of the natural environment. It mimics the Amazon Rainforest, where Vault personnel observed the behavior and development of ANMC creatures. Aya struggles to make her way into the Vault, and bit by bit gathers the gruesome facts about the place. As a result, like any stranger, she finds herself in mortal danger, but Kyle saves her. With him, Aya wanders through the Vault sewers and finds the gate leading to Dryfield. * There, on the water tower, Aya meets a dying Pierce who has been attacked by ANMC mosquitoes. She manages to save him and goes back to the Vault, but Pierce secretly follows her. Having found the computer in the Vault, she learns that all ANMC monsters are created on the basis of her cells and mitochondria in them, once taken by Klump in the first part of the game. At this moment Pierce calls and talks about NeoArk, and the places where his main "Power Sources" are located. Disabling, or rather destroying them, she returns back and takes the elevator down to the very depths of the Vault, where she encounters a huge ANMC, which is controlled by a little girl named Eve (a clone of Aya, created from her cells). Aya kills ANMC, learns that terrible experiments were carried out on Eve and that Eve attacked against her will. At this moment, the Shelter is already teeming with guard golems, whose purpose is to protect the shelter and prevent Eve from escaping. But, Aya and Eve flee, get out by another elevator leading to NeoArk. There, Eve is captured by No. 9, in pursuit of him, Aya is interrupted by guard golems, which are programmed to protect the Vault. While trying to find Eve and # 9, Aya finds a note from Pierce asking him to call Judy the girl from the MIST weapons department. After that, Aya leaves the Vault through the main entrance, where she is met by a company of golems, but they are attacked and killed by a platoon of Air Force soldiers, and then deployed the headquarters. At headquarters, Aya reports to the elder about the situation, where she also meets Judy and Flint - Douglas' dog. Since Eve has not yet been found, on the only piece of evidence (Eve's teddy bear) with Flint's help, Aya travels back to the Hideout and finds a half-dead Pierce in the golem freezer. Pierce, along with Flint, leaves for the headquarters, and Aya goes to the "reactor" of the Vault, where she finds Eve along with No. 9 and Kyle, where she learns the whole truth about the events taking place and Kyle shoots her. At this moment, the headquarters collapses and, by decision of the government, a military satellite, a devastating blow is inflicted on Dryfield and the Vault, due to which the cocoon in which a huge and very dangerous ANMC developed is destroyed. Eve, Kyle and No. 9 fall down, while Aya remains upstairs and decides to fight to the end, to find and save Eve, who is so similar to her dead sister Maya. After the fight with ANMC, the true form of a super-being is born. Aya kills the monster and finds Eve alive, after which Aya and Eve are rescued.
* At this point, the player has the right to choose. You can go to Dryfield, or continue exploring the Vault. From this choice, the course of events slightly changes, that is, in the first version, Aya will be helped by Pierce, and in the second by Kyle. But this does not affect the ending of the game. Unless only for the rescued Pierce at the end, a larger amount is credited.