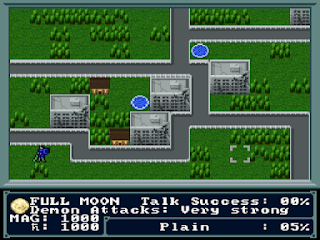 Genre: Role-Playing (RPG), Strategy / tactics
Perspective: Top-down
Pacing: Turn-based
Setting: Fantasy, Sci-fi / futuristic
Published by: Atlus Co.
Developed by: Atlus Co.
Released: 1994
Platform: Super Nintendo (SNES)
In the late 1990s, wars between different races of people lead to a large number of deaths, and many countries are closed from the outside world. Decades later, in the year 202X, a guy living in the D-03 area of ​​Tokyo receives a strange Demon Summoning Program on his computer. Right after that, he is attacked by demons. After the battle, he went to a mysterious tower, where he meets a girl who decides to join him to fight the demons that have taken over Tokyo.
The game has three endings: bad, normal and good. A bad ending can be obtained by killing at least one demon in chapter 51.
The gameplay of the game is a series of turn-based battles in the best traditions of Tactical RPG.
‹
›
Home
View web version