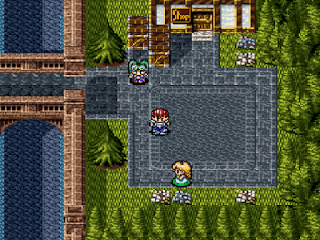 Genre: Role-Playing (RPG)
Perspective: Top-down
Art: Anime / manga
Pacing: Turn-based
Gameplay: Japanese-style RPG (JRPG), Puzzle elements
Published by: Natsume
Developed by: Neverland Co.
Released: 1996
Platform: Super Nintendo (SNES)
One of the best RPGs of all time from Neverland, Natsume and Taito. This work has an interesting story, great graphics, good music, amazing spell effects and much, much more. The story unfolds very simply. The monster has stolen the key to the Sundletan cave and only our main character named Maxim can stop him, as he is a monster hunter and this is his job. Pretty soon, he meets up with a mysterious girl named Iris, who seems to know more about Maxim's future than he does. The game will present many more surprises and ups and downs in the story, as well as real problems for our heroes. The game has seven acting characters, each with their own unique personality and unique personality. The characters very often joke and mock each other, which makes it great to believe in their liveliness. A lot of difficulties can be introduced into the passage and all kinds of puzzles. So the use of mental abilities in the game will also be found. At the very beginning, various tricks are very simple, but each time they become more and more difficult. The increase in complexity is organized very skillfully and the balance does not suffer. Definitely play this piece of art. This game is a prequel to the first part. So you can start your acquaintance with the series from this version. A true gem of a Super Nintendo RPG.
‹
›
Home
View web version