Lufia & the Fortress of Doom (SNES) 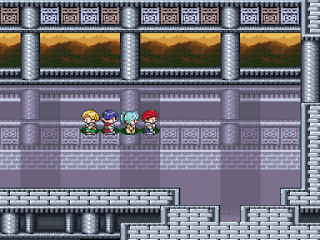 Genre: Role-Playing (RPG)
Perspective: Top-down
Pacing: Turn-based
Gameplay: Japanese-style RPG (JRPG), Puzzle elements
Setting: Fantasy
Published by: Taito America Corporation
Developed by: Neverland Co.
Released: 1993
Platform: Super Nintendo (SNES)
Estopolis/Lufia is one of the best Super Nintendo RPGs from Neverland, Natsume and Taito. This is a very emotional game with a gripping story, different characters, interesting locations and many other things that really make you come back to the game more than once. The plot is the strongest part of the whole series. 100 years ago, 4 heroes named Maxim, Selan, Guy and Artea went to battle with the Sinistrals, four creatures that represent destruction, terror, death and chaos. Maxim possessed a mystical weapon, one of the purposes of which was to destroy Sinistral through intense concentration. Ultimately, Maxim and his wife Selan died in the Sinistral stronghold, while Guy and the elf Artea escaped. Peace and quiet reigned in the world again. A few years later, Maxim's descendant is found by a young girl named Lufia, who only remembers her own name and nothing else. Both of them became fast friends. After a while, the boy Alekian turned into a knight, and Lufia into a beautiful young girl, and at this time strange things begin to happen in the world. The story is very beautifully done, and still remains almost unsurpassed for many. At first glance, the graphics and other components of the game do not cause any positive impressions and interest in this product. However, the more you play Lufia, the more you understand its magnificence and the whole genius of its implementation is revealed. Lufia is a game where the story will keep you going from the very beginning to the very end. And despite the fact that the game is not so short, sometimes you want it to never end. Everyone should try the game, it gives incomparable pleasure and can remain in memory for a very long time, as well as its continuation on this system, which is even better.
‹
›
Home
View web version