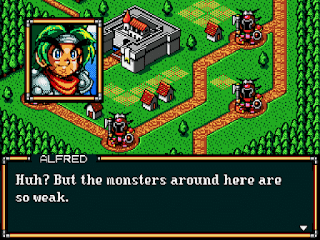 Genre: Strategy / tactics
Perspective: Top-down
Art: Anime / manga
Setting: Fantasy
Published by: SEGA Corporation
Developed by: Nihon Falcom Corp.
Released: 1994
Platform: SEGA Genesis / Mega Drive
This is a fun strategy management game similar to Majesty. Many in strategies are accustomed to completely taking control of themselves. But in this strategy, you can control slightly and observe most of the time. In general, your main goal is to destroy the enemy's castle and kill the hero who lives in it. But it's not so easy to get to him yet. And so you are given a castle, from which after a certain time one peasant comes out, he can build other houses, from which peasants also come out. With a certain number of peasants in one stack, he can become a warrior. You can control just one character. So if you love games like Majesty. It's worth playing this one too.
‹
›
Home
View web version