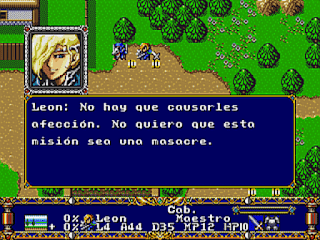 Genre: Role-Playing (RPG), Strategy / tactics
Perspective: Bird's-eye view, Top-down
Visual: 2D scrolling
Art: Anime / manga
Pacing: Turn-based
Setting: Fantasy
Published by: Masaya
Developed by: NCS Corporation
Released: 1994
Platform: SEGA Genesis / Mega Drive
Continuation of the popular Warsong game. The second part is called Langrisser 2, this is due to the fact that it was published only in Japan, therefore it did not receive its second American name. The story develops here many years after the events in the first part. Again, good and evil will confront each other, in an interesting plot that will not make you bored. The game touches upon the most important moments associated with wars and ways to eliminate them, as well as the eternal questions of courage, honor and betrayal. This RPG has not undergone major changes in terms of the combat system, but still small innovations have been introduced. The purchase of necessary items appeared, the main infantry was divided into two types, the units became more diverse and now a separate class can have several representatives, new types of magic have been created, the detachment began to be formed from five units, each of which received a double unit of health.
‹
›
Home
View web version