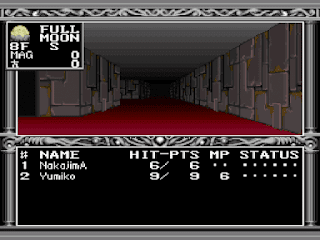 Genre: Role-Playing (RPG)
Perspective: 1st-person, Top-down
Pacing: Turn-based
Setting: Cyberpunk / dark sci-fi, Post-apocalyptic
Published by: Atlus Co.
Developed by: Atlus Co.
Released: 1995
Platform: Super Nintendo (SNES)
Kyuuyaku Megami Tensei is a collection of remakes of the first two NES games. Improved graphics, now it meets all the standards of the Super Nintendo console. There have also been some minor changes to the interface (reminiscent of the classic look of Shin Megami Tensei, especially in the first game). The first Megami Tensei is about Akemi Nakajima, a programmer who must become a devil to prevent an invasion from another world. Megami Tensei II puts us in the role of a nameless hero, a member of the Devil Buster group who fight demons in a post-apocalyptic world destroyed by an atomic explosion at the end of the 20th century. Fans of the popular Megami Tensei series will appreciate these works. Megami Tensei is a very popular series not only on the SNES console.
‹
›
Home
View web version