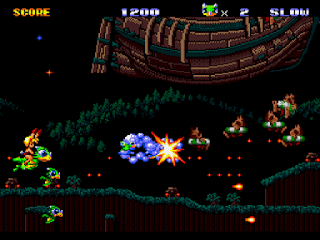 Genre: Action
Perspective: Side view
Visual: 2D scrolling
Art: Anime / manga
Gameplay: Shooter
Published by: JVC Musical Industries
Developed by: Victor Entertainment Inc.
Released: 1994
Platform: SEGA CD / Mega-CD
Keio Flying Squadron is the first in the series and the only one in the series for the Sega CD / Mega CD. The game is a 2D shooter. The game refers to Japanese culture, both antiquity and modernity at the same time. The main character of the game is a fourteen-year-old girl named Rami Nana-Hikari. She was assigned to the keepers of a secret treasure (artifact). But, evil and insidious doctor Pon (Dr. Pon Eho) stole the priceless artifact. Now Rami, together with Spot, will have to stop him and take the ancient relic. We have to go through 7 levels, dragons will help us in this. A good shooter, many different enemies, an interesting character improvement system.
‹
›
Home
View web version