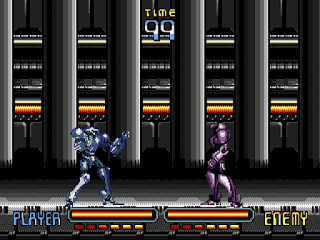 Genre: Action
Perspective: Side view
Gameplay: Fighting
Setting: Sci-fi / futuristic
Published by: Micronet Co.
Developed by: Holocronet
Released: 1991
Platform: SEGA CD / Mega-CD
Heavy Nova is a mixture of platforming and fighting genres, but it cannot be called Beat 'em up. Originally released for the Sega Mega-CD in 1991, Heavy Nova was later made for the Sega Genesis / MegaDrive. In the game you are to be controlled by a robot. The plot of the game is that over time, humanity has almost completely exhausted all the resources of the earth, while doing good harm to it. But fortunately, humanity has been watched from the depths of space for a long time. An alien spacecraft from the planet Akirov has appeared in the solar system. They came to help. Thanks to alien technology, humans have been able to travel far into space. And in 2102 they were able to get into the world of Akirovian. But ten years later, the Akirovians' conspiracy was revealed, they wanted to enslave humanity. Eight years later, they left the solar system. So people still have heavy robots D.O.L.L (Defensive Offensive Lethal Liberator). The game takes place in the year 2120.
‹
›
Home
View web version