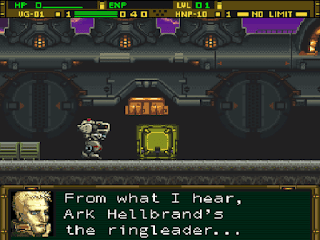 Genre: Action, Role-Playing (RPG)
Perspective: Side view
Gameplay: Platform, Shooter
Vehicular: Mecha / giant robot
Setting: Sci-fi / futuristic
Published by: Square Co.
Developed by: Cobra Team, Omiya Soft
Released: 1996
Platform: Super Nintendo (SNES)
The first branch of the main Front Mission series of games jointly developed by Square Soft and Omiya Soft, and the last game in the series to be released for the Super Nintendo. In the game, you have to control for the former soldier Albert Grabner, who, after the betrayal of his colonel, deserted from the army and, taking the side of the partisans, will try to prevent another coup d'état.
The game stands out, first of all, for its unusual genre for games in this series - Action / RPG, which in the common people in the games of those times can be called "Run and Gun", well, sometimes jump again. But since the great Hironobu Sakaguchi himself was responsible for the creation, the game turned out to be more role-playing than arcade.
The role element is expressed, first of all, in the growth of Albert's levels and his characteristics / skills, which will facilitate your further passage of the game. In addition, in this part, as well as in the previous one, it is possible to assemble your wanzer (local furs) from diverse parts and mechanisms that you get during the mission. And finally, it is possible for Albert to upgrade the possession of a certain type of weapon, however, it’s good or bad for you to decide: pump half the game to the maximum possession of a shotgun, so that at the end of the game you bite your nails from the impossibility of owning a rocket launcher, realizing the fact that the damage caused by a shotgun, minimal - the pleasure is doubtful.
As for the musical score, it was the team behind the Final Fantasy X soundtrack: Nobuo Uematsu, Yasunori Mitsuda, Junya Nakano, and Masashi Hamauzu. Of course, the musical accompaniment turned out to be somewhat different, since techno-theme always prevails in games about war games between giant robots, but believe me - at some moments, the music will really take you to the quick and even, perhaps, will be able to squeeze a mean tear out of you.
All in all, a game that so many talented people were responsible for making couldn't be bad, but it's also not the Front Mission you might be used to. Here you will not carefully think through your moves and decide what is best for your Wanzer - a rapid-fire machine gun or a hand rocket launcher. But instead, you will get a furious and fast-paced 2D Action, exactly the same as in your distant childhood on consoles, in which it will also not be superfluous to think with your head. But still, fans of the Front Mission universe who want to know all the intricacies of the universe have nothing to catch here: the game is as far an offshoot as possible, including characters, countries and nations.
‹
›
Home
View web version