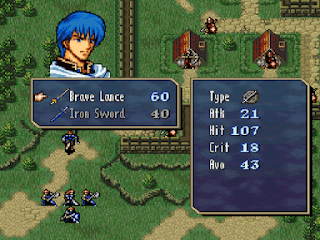 Genre: Role-Playing (RPG), Strategy / tactics
Perspective: 3rd-person, Top-down
Art: Anime / manga
Pacing: Turn-based
Setting: Fantasy
Published by: Nintendo Co.
Developed by: Intelligent Systems Co.
Released: 1999
Platform: Super Nintendo (SNES)
The general public regards this game as one of the best games of all time by the peoples. The Super Nintendo was such a successful system with all sorts of projects that many implementations have long settled in the minds of numerous gamers. This is one of the last games made for this great system. At the same time, the Nintendo 64 was already halfway through its life cycle, and the Super Nintendo was a distant memory in the minds of many players of that time. The Super Nintendo is widely regarded by many enthusiasts as one of the best, if not the best gaming console of all time. Hell, the Dreamcast was already up and running when Fire Emblem - Thracia 776 came out. You could say it was an "alien" landed in old 16 bit console territory. The game ended up in the sunset not even of Snes, but of a new generation of systems such as N64, DreamCast, PlayStation. So, Fire Emblem was not a debut for the Nintendo 64, but was made for the "long-dead" Super Nintendo.
For the most part, Fire Emblem - Thracia 776 uses the same graphics engine as previous games. The faces of the characters, however, are of better quality and convey a wide range of all the emotions of all kinds of game personalities. The animations of the battles on the field are simply incomparable and, perhaps, the pinnacle of the entire series. All in all, Thracia 776 is arguably the most beautiful 2D Fire Emblem, even surpassing the DS Fire Emblem. And here is the history, the weak area of this part. The entire game takes place in only one half of the continent. The story does an excellent job of conveying the theme of resistance, providing extensive insights into the word and what it entails and what is to be faced. The first quarter of the game starts very interesting - you have to escape from a giant powerful army, and not go head-on. However, the game is then turned into a fight between random hordes, bandits and military units with some thrilling chapters. Maybe someone will like it, because not everyone likes long epic battles in strategy or tactics. Overall, there are so many other incentives to play Thracia 776. The gameplay gets a 10 out of 10. It was the gameplay that made Thracia 776 a real gem, and possibly one of the greatest strategy games of all time. This part has the deepest and most complex nuances in this regard. Some of the innovations that were introduced, such as fatigue or system capture, were never used again. Some other elements with dignity were borrowed in subsequent parts. The Rescue allowed Fire Emblem to reach unprecedented strategic depth and allowed players to save allies in danger of death. Fog of War, one of the unique and challenging chapters, made players more cautious. There was another innovation that Thracia 776 brought and that was included in subsequent parts. This was the ability of thieves to steal items and weapons from their enemies. In previous Fire Emblems, thieves could only steal gold. Alternate routes are also an enduring tradition of the series that started with this installment. In order to get a certain chapter, it was necessary to fulfill specific conditions and goals in another part of the narrative. All this brought new characters, additional history, rare items and powerful weapons. It also gave such an unshakable value as a replay. I had to replay the game to get to know all the chapters that this work has to offer. Also in this part you can find other features that distinguish it from later and earlier versions of Fire Emblem. As you can see, Thracia 776 was and remains in terms of gameplay on a level and, even for some, far superior to subsequent parts of the series and other strategy games. A lot of innovations come and go in Fire Emblem, but this part can show some unique features. The game didn't have huge leaps in graphics and sound, but it did make a massive leap in terms of gameplay. The game has the most ruthless artificial intelligence in the entire series. The computer is so smart that the enemies trade with each other and buy new weapons from shops if the situation calls for it. Thracia 776 called for effective tactical planning and the development of a high level of strategy. Thracia 776's unique features, ruthless intellect, and great map design help make it not only one of the hardest and deepest tactical games in the series, but one of the best.
Fire Emblem Thracia 776 was not only a late development for the Super Nintendo, but also the last masterpiece of the console. Super Nintendo has given us many titles that are regarded as incomparable and perfect classics like Super Mario World, Legend of Zelda, The - A Link to the Past, Donkey Kong Country series, Super Metroid, Yoshi's Island, Kirby Super Star, Super Mario Kart, Secret of Mana, Super Mario RPG , Chrono Trigger, Final Fantasy VI, Lufia II, etc. I hope that many will support me that Fire Emblem Thracia 776 deserves to be among the listed games, and named among the greatest games that grace the Super Nintendo console .
‹
›
Home
View web version