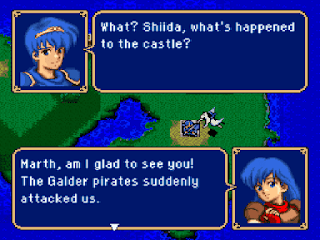 Genre: Role-Playing (RPG), Strategy / tactics
Perspective: Top-down
Art: Anime / manga
Pacing: Turn-based
Setting: Fantasy
Published by: Nintendo Co.
Developed by: Intelligent Systems Co.
Released: 1994
Platform: Super Nintendo (SNES)
An amazing series that you will want to play again and again. The game, in fact, is divided into two stories, telling about the exploits of Prince Marcus of Altea. The first half makes it clear that the prince had to flee the kingdom as it was taken over by the Doluna empire. In the end, Marcus comes to the point where he wants to return his homeland from under the yoke of darkness. This half is actually a remake of the first Fire Emblem game on the NES/Famicom with updated graphics, sound and some new characters. The second half, which can be chosen at any time, tells about Marcus in age. In it, former friends became enemies. King Hardin's peaceful reign has turned into an oppressive dictatorship, and the once noble Hardin will stop at nothing to bring the entire continent to its knees under its total subjugation. After hearing about Hardin's crimes, Marcus goes on a campaign to find the truth about what changed his best friend so much. The story makes you feel all the vicissitudes and empathize with the characters. The storytelling is one of the most original approaches in the game. Obedient management. The difficulty depends on your effective tactical actions. Naturally, if you constantly lose one soldier after another, the game will be more difficult. The musical accompaniment leaves a decent impression.
‹
›
Home
View web version