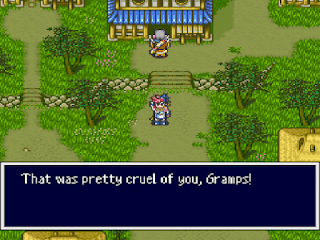 Genre: Role-Playing (RPG)
Perspective: 3rd-person, Top-down
Pacing: Turn-based
Published by: Hudson Soft Company
Developed by: Red Company Corporation
Released: 1995
Platform: Super Nintendo (SNES)
The most important feature of this game is that it tried to be the first of many with a system that its programmers called PLG (Personal Life Game), a concept according to which an internal clock is incorporated into the cartridge whose date determines the appearance of certain in-game events. When you turn on the game you have to set the date and time and from that moment the time runs in real time. This gives many possibilities: it gets dark and dawn at the same time as in real life, stores have hours and some are only open on certain days. In each town there are festivities on certain days and at that time you can take advantage of it to buy interesting items, and you can even celebrate Christmas. It also includes the concept of adopting pets, which must be taken care of daily because, if not, they die (as a curious fact, this game used this concept before the appearance of Bandai's Tamagochi virtual pet). Other games that use PLG are Pokémon Gold and Pokémon Silver for the Game Boy or Pokémon Crystal Version for the Game Boy Color.

The world of Jiphang consists of 6 kingdoms, the Fire Bear Kingdom (Hijuma Koku), the Peacock Kingdom (Kujaku Koku), the Turtle Kingdom (Kame Koku), the Crane Kingdom (Tsuru Koku), the Kingdom of the Dog (Inugami Koku), the Kingdom of the Dragon (Ryu ou Koku). Of these the Dragon Kingdom is the most powerful and has long maintained a peaceful policy. The game shows a sequence of scenes where it is seen that the new king of the Dragon kingdom enters the court and is greeted by his servant, the new king is the younger of two brothers and his servant reveals that the former Flame has selected. The King worries about his older brother but his servant tells him that she need not fear as the ancient flame chose him. In another room his older brother talks with Ninigi, who advises him that he should be the king and not his brother and that he should kill his brother so he can become king. In another scene, he is shown talking to two guards who guard the Gates to Hell about the noted displeasure of the older brother, suddenly the older brother appears and kills them, then breaks the seal and releases Ninigi to possess his power. Before dying the younger brother tells him "even if you kill me, you will not be able to extinguish the old flame". At the end you see the three eyes of Ninigi looking at the Gates to Hell.