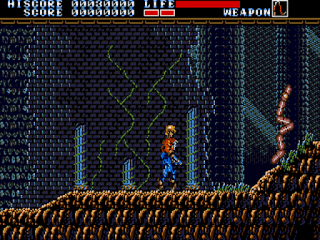 Genre: Action
Perspective: Side view
Visual: 2D scrolling
Art: Anime / manga
Gameplay: Platform
Setting: Fantasy, Sci-fi / futuristic
Published by: Wolf Team
Developed by: Wolf Team
Released: 1991
Platform: SEGA CD / Mega-CD
Earnest Evans game is almost the same as Earnest Evans game for Sega Genesis / MegaDrive. This is not surprising, since the Sega CD version of the game appeared earlier than the SMD version. The Sega CD version of the game contains cutscenes and CD music. The plot of the game has not changed a bit. Evans seeks figurines and confronts evil. The game is the first in a trilogy of games. Later, two more games were released under the names El Viento and Anett Futatabi.

The developers, inspired by the adventures of Indiana Jones, created a game that takes us to the world of the brave adventurer Earnest Evans III. He seeks fame and treasure among the ruins of a lost city somewhere in the jungle of South America. And all because his grandfather, Earnest Evans, learned about the existence of three ancient idols, which contain enormous energy sufficient to destroy the Earth. But he did not have time (he was seriously wounded) to destroy them, so that no one dared to use the power of idols for insidious purposes. So you have to find artifacts, as a treasure hunter named Brady Tressider has appeared on the horizon, who has one worldwide destruction in his mind.
‹
›
Home
View web version