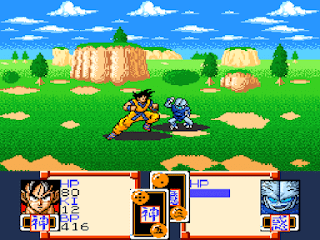 Genre: Role-Playing (RPG)
Perspective: Top-down
Art: Anime / manga
Setting: Sci-fi / futuristic
Published by: Bandai Co.
Developed by: d&d Corp., Tose Co.
Released: 2001
Platform: Super Nintendo (SNES)
A role-playing game set in the Dragon Ball Z universe with an interesting originality. The combat system is unique. Instead of traditional commands, you choose cards to make an attack, etc. Not a bad idea. The whole approach is based on the principle: rock, scissors, paper. There are a lot of actions and it’s easy to understand everything. Each character has their own favorite attack card. The game will suit all fans of the anime of the same name, some will even be delighted with it. For beginners, I will say that the story is really done very well, and I think it will not be difficult for you to know what is happening throughout the story. Music does not look particularly impressive and in some places terrible. Other sound effects are very well done. The graphics are average, but everything changes when the action turns into a combat setting. The characters are drawn very high quality and you marvel at their detailed images. All kinds of animations look very cool.
‹
›
Home
View web version