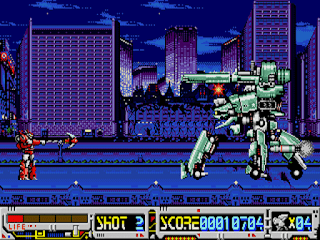 Genre: Action
Perspective: Side view
Art: Anime / manga
Gameplay: Platform, Shooter
Setting: Sci-fi / futuristic
Published by: Wolf Team
Developed by: Wolf Team
Released: 1993
Platform: SEGA CD / Mega-CD
In the game you have to take control of a huge robot. Tanks and helicopters, in comparison with you, are not great, and people are generally insects. But there will be huge colossus, many times larger than you. The plot of the game is based on the plot of the anime cartoon. You will play as Ryo, he begins his career as a test racer at Yaesu. But while testing a new experimental machine, he finds himself in a different dimension. There he is attacked by unknown creatures Devastators, but he is rescued by a group of robots. There he learns a lot of interesting things, and now his task is to stop evil.
‹
›
Home
View web version