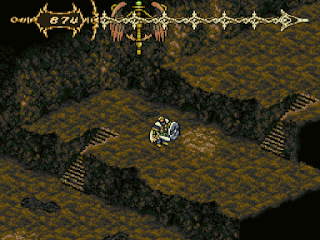 Genre: Role-Playing (RPG)
Perspective: Bird's-eye view
Visual: Isometric
Setting: Fantasy
Published by: Enix Corporation
Developed by: Westone Co.
Released: 1996
Platform: Super Nintendo (SNES)
Late RPG from Enix. The company has released real masterpieces in this genre and on this system before, often introducing very original and non-trivial concepts. This is what happened with Dark Half. Many games in this genre have long exploited the idea of ​​confronting the light side with the dark. This original and original game from Enix professes the principle of the inseparability of good from evil. You are given the opportunity to alternately play for two characters. One is a warrior who brings good, the other is the real personification of evil. The latter can replenish its power by killing civilians - I think you can see this in few RPGs! Merciless devastation of settlements and destruction of all living things! The game is divided into several chapters. And in the last part, you are given a choice in favor of one of the heroes, sacrificing the other. And it will be in your will to decide what will triumph - good or evil, so there are two endings in the game. Great concept! It is immediately clear that the developers had everything in order with their imagination. The whole game is made in a gothic style with dark gloomy backgrounds and depressing music. Recommended to all fans of the original games on this system. Dark Half can also be attributed to worthy controversial projects on the Super Nintendo.
‹
›
Home
View web version