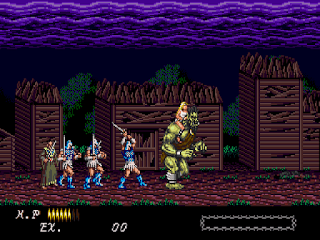 Genre: Action
Perspective: Side view
Visual: 2D scrolling
Gameplay: Beat 'em up / brawler, RPG elements
Setting: Fantasy
Published by: Information Global Service
Developed by: Information Global Service
Released: 1991
Platform: SEGA Genesis / Mega Drive
The story in the game tells of a warrior girl. She had a difficult fate. Long ago, two daughters, Regine and Dahna, were born in the same family. Both sisters have possessed unusual magic since childhood. But on the seventh day after their birth. Their parents were killed and their sisters were kidnapped. But Dakhna managed to escape, and later she took refuge in a nearby village. In the village, throughout the entire time, Dakhna honed her skills under the guidance of the local magician and sorcerer Magh. Ten years later, mysterious forces led by a sorceress invaded the village and kidnapped the sorcerer, challenging her to battle. In the game, in addition to hand-to-hand combat, you can use various magic and fireballs.
‹
›
Home
View web version