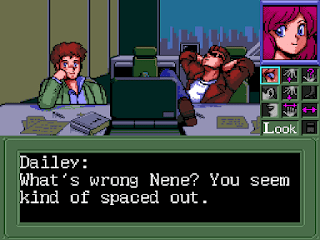 Genre: Action, Adventure
Art: Anime / manga
Setting: Sci-Fi Futuristic
Published by: Naxat Soft
Developed by: Spiel
Released: 1991
Platform: TurboGrafx / PC Engine
The history of the Bubblegum universe unfolds in the near future, somewhere in the thirties of this century. It was by this time that, according to the estimates of the scriptwriters, people will learn to produce humanoid robots, which for the most part will not differ in intelligence and ingenuity, but will be able to perform a number of functions that lazy people no longer get their hands on. Having mastered the profession of a coffee-maker, utility worker or floor polisher, boomers (as robots will be called) will become as integral part of everyday life as turnstiles in the subway. But in this world, no one is perfect, and therefore, boomers will accidentally find one tiny flaw: from time to time they start to go crazy, killing people who turn up at the arm. A preemptive measure in the form of the destruction of robots as a class will not even occur to anyone for the simple reason that no one wants to carry coffee or scrub floors with his own hands. For everyone without exception will believe that any occupation with dirty and thankless work, when the year 2030 is in the yard is a complete savagery, anachronism and a senseless attempt to stand in the way of the progress rushing forward, which should deliver humanity from the dark present straight to the bright future. Indeed, let it be better for intelligent machines to continue going crazy and killing whoever they want - the main thing is that they have time for their unpaid labor.
And all the same you can't kill all the people, there are so many of them running around ... Ask Godzilla, he tried! And now, when the police stop coping with the riot of mutinous cars, four heroes who call themselves Knight Sabers will join the case. During the day, they are ordinary girls who can do anything from singing songs in bars to adjusting traffic, but at night they all put on armored suits and clean the streets of brain-damaged boomers. And the girls get it so easily that neither the police nor the civilian population can figure out who these Knight Sabers are and on whose side they are.
‹
›
Home
View web version