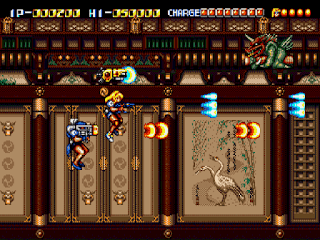 Genre: Action
Perspective: Side view
Visual: 2D scrolling
Art: Anime / manga
Gameplay: Arcade, Shooter
Published by: Vic Tokai Corporation
Developed by: Vic Tokai Corporation
Released: 1993
Platform: SEGA Genesis / Mega Drive
Sequel to Battle Mania / Trouble Shooter. The graphics and music have increased significantly, as has the length of the game (from 6 to 9 stages). The same cool girls are fighting not only with robots, but also with all sorts of mutants. As before, there is a super attack that automatically charges over time. For approximately every 20 thousand points, one unit of health is given. If you have any difficulties with the passage, the developers have come up with a special code with which you can train individual levels: go to Options, hover over SILENCE, press A four times, then press left until NOTHING 13 appears, then press A three times. We advise you not to rely too much on Continues, but to play carefully from the very beginning in order to accumulate more vital energy for the last levels. Good game!
‹
›
Home
View web version