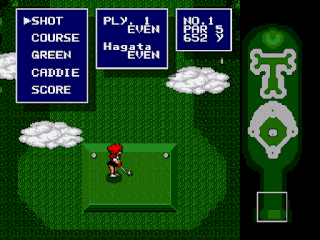 Genre: Adventure, Sports
Perspective: 1st-person, Top-down
Art: Anime / manga
Sport: Golf
Setting: Sci-fi / futuristic
Published by: SEGA Enterprises Ltd.
Developed by: Santos
Released: 1991
Platform: SEGA Genesis / Mega Drive
Who would have thought that playing golf could be so extraordinary. Not only young schoolgirls, mafia showdowns, but also magic were woven into this game of golf.
In order to seize power in the whole world, the evil Professor G sends his people to kidnap two schoolgirls, red-haired Yui Mizuhara and brunette Ran Ryuzaki. These two schoolgirls are the best at playing one of the Battle Golf varieties. But Yui Mizuhara manages to get out before she can be brainwashed. And now she needs to defeat everyone so that the world is not in danger. Quite an interesting game, in it you can talk to each of the characters before the fight. Of course, ignorance of the Japanese language may hinder this. Also, while playing golf, you can use special features - magic.
‹
›
Home
View web version