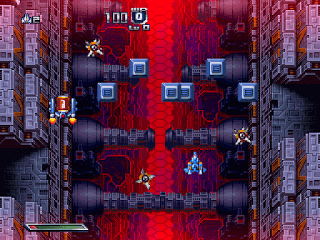 Genre: Action, Compilation
Perspective: Top-down
Gameplay: Arcade, Shooter
Setting: Sci-fi / futuristic
Published by: Compile
Developed by: Compile
Released: 2001
Platform: PlayStation (PSX, PS1)
Zanac X Zanac is a collection of 2 games: Zanac Neo and classic Zanac. Of course, different parts of Zanac went out to different platforms, but it was these 2 parts that gained popularity. In Zanac Neo, a remix of the main theme of the classic game sounds on the start screen. In addition, level 1 contains a remix of the level 1 melody of the classic Zanac. Zanac Neo is colorful, interesting and diverse. There are still 0-7 weapons in the game (fans know). Many of them have been reworked, but, for example, "2" is the same shield, and "5" is a boomerang ball (for a standard ship). There are several ships to choose from. By the way, the action of Zanac Neo begins exactly at the level with 3 brains (the last 12th level of the classic Zanac) - this is kind of a prologue. The game has multiplayer for 2 players.
Zanac differed from other games in the genre by its unique implementation of the "artificial intelligence" of opponents. Player actions - such as shooting, taking prizes, destroying enemy fortifications, and some others - can lead to an increase or decrease in the number of opponents and affect their behavior. At the beginning of each of the 12 levels, the "intelligence" settings are reset, and this also happens when a special enemy ("Sart") is destroyed.
‹
›
Home
View web version