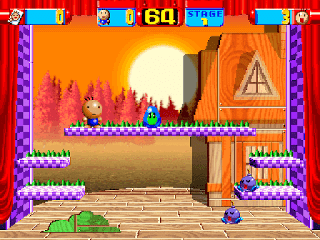 Genre: Action
Gameplay: Platform, Puzzle elements
Published by: Irem Software Engineering
Developed by: Irem Software Engineering
Released: 1996
Platform: PlayStation (PSX, PS1)
At the opening ceremony of the Gussan Paradise theme park, a creature known as YoYo invades it. He takes hostages from the crowd and manages to elude the police and take control of the park. It's up to Guss and Yodie, two innocent bystanders, to take back the park.
YoYo's Puzzle Park is a puzzle platform game featuring some sixty platform-filled levels similar to Bubble Bobble. The player (as Guss or Yodie) can hop around on them, while avoiding the enemies that crowd the platforms. The enemies hurt the player by touching them, and some have ranged attacks like lasers. The players can strike back at the enemies with bombs that scatter the level, throwing or jumping on them activates their two second fuse. The goal is to kill all the enemies in a level within the time limit.
To aid the protagonists there are several collectibles such as vehicles. Guss and Yodie can also stun enemies with their Yo-yos. In the multi-player mode, you can fight against your friends in a two-player deathmatch game.
‹
›
Home
View web version