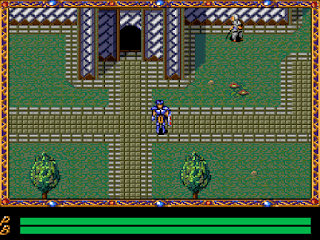 Genre: Action, Role-Playing (RPG)
Perspective: Top-down
Art: Anime / manga
Setting: Fantasy
Published by: NEC Home Electronics
Developed by: Micro Cabin Corp.
Released: 1994
Platform: TurboGrafx-CD (PC Engine)
The hero of the first two parts, Latok, now lives with his mother in the city of Fearless. But one day the envoy delivered the terrible news - the Farland castle was attacked. The king, princess and all the soldiers are brutally slain. The third demon Zomu Dizae from the demon world Zekisis (the first two we have already killed) appeared on the horizon, because he was summoned by the Necromancer. The latter, by the way, resurrected the killed soldiers and turned them into obedient monsters. Can Latok help the country again?
The gameplay is very similar to the previous series. Our hero starts at level 50, but you can still level up. In cities, as well as in classic RPGs, you need to buy weapons, armor, potions, magic and get information.
‹
›
Home
View web version