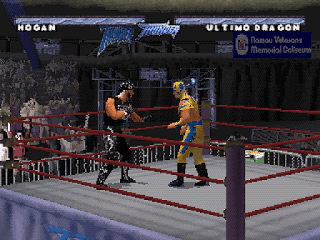 Genre: Action, Sports
Perspective: 3rd-person
Sport: Wrestling
Published by: THQ Inc.
Developed by: Inland Productions
Released: 1999
Platform: PlayStation (PSX, PS1)
WCW / NWO Thunder is based on the game engine of another wrestling game WCW Nitro, which solved the problems of wrestling control, which were completely out of control in the original version. But the developers of the game went further - they added a lot of options, techniques and fighters. A total of 64 fighters (32 hidden, 32 - to choose from) from Goldberg to Raven and, of course, all kinds of competition modes: Sigle, Tag Team, Battle Royal and Steel Cage. Fans from outside the ring may throw water bottles and other "weapons". The new Night Editor mode allows you to "enhance" individual body parts of your wrestlers, sometimes very funny! There is also an excellent commentary on the battles, and in general the sound design is made to match the coolest WWF War Zone!
‹
›
Home
View web version