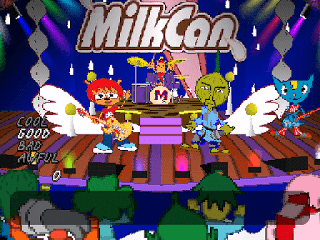 Genre: Action
Perspective: 3rd-person
Visual: Cinematic camera
Gameplay: Music / rhythm
Interface: Direct control
Published by: Sony Computer Entertainment America Inc.
Developed by: NanaOn-Sha Co.
Released: 1999
Platform: PlayStation (PSX, PS1)
Um Jammer Lammy is a sequel to the controversial, but very unusual and in some sense cult game PaRappa The Rapper, the game that laid the foundation for the musical game as such, in the sense that it was not all about dancing in the spirit of Dance Dance Revolution or BeatMania. In PaRappa The Rapper you play a musical adventure where the basis of the game is not only dancing, but also goals, for example, to win the heart of the girl you are in love with. Like any game, this one has its fans and opponents, but if someone really fell in love with it, they will play the second part with great pleasure. Excellent cartoon graphics, very dynamic game action and a very nice new character. Adorable baby Lammy, dreaming of becoming a rock and roll star, dances with a fiery Dalmatian, an airplane pilot with a fantastic mustache (behind which you can't see anything) and even a beaver armed with a chainsaw. And of course, the absolutely outstanding dancer Onion Head (he was PaRappa's teacher in the first part) is back in the game. Baby Lammy is dancing accompanied by an excellent ensemble MilkCan, so that everyone who has figured out the controller, has an ear for music and a sense of rhythm, can have a great time, especially since the musical styles of the game are very diverse, there is - rock, heavy metal, punk, pop music and other genres, as they say, for every taste and color.
‹
›
Home
View web version