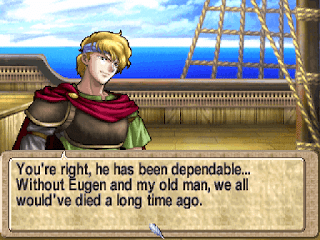 Genre: Role-Playing (RPG), Strategy / tactics
Perspective: Bird's-eye view
Pacing: Turn-based
Gameplay: Tactical RPG
Setting: Fantasy
Published by: Enterbrain
Developed by: Bits Laboratory, Tirnanog Co.
Released: 2001
Platform: PlayStation (PSX, PS1)
The game takes place on the continent of Riberia, whose territory was divided between four kingdoms. These kingdoms were destroyed by the evil Zoa Empire and its devil-worshiping ruler. A period of instability began on the continent, and it plunged into darkness. The Kingdom of Reeve is one of the four kingdoms of Riberia. It consisted of several principalities. The prince of one of the principalities called Razelia was one of the main characters, Runan. After the fall of the principality, where his father ruled, Runan fled and wanted to hide in a small port city. However, this city also fell into the hands of the Empire. Then Runan and Holmes, a prince of another principality, retreated to the new kingdom of Welt, along with a small detachment of soldiers. The King of Welt gave them his support. So the two heroes began their journey to the destruction of the evil Empire.
The main part of the gameplay of TearRing Saga is devoted to battles on a 2D map, the player commands a squad of fighters, to complete the battle you need to achieve a certain goal. Between battles, the player sees the global map of the world and can navigate it for further progress in the game. The game has two main characters, Runan and Holmes. The player must divide his army into two parts, each character will have his own army under his command. Runan's campaign consists of a series of scenarios where he fights against the Empire. However, you can ignore the plot scenarios and start collecting treasures, increasing the strength of the army, in parallel going through Holmes's company. For most of the game, the two armies travel separately. They meet several times, and during this time they can exchange characters and items. This allows units that were trained in Runan's army to be used for Holmes's army, or vice versa.
‹
›
Home
View web version