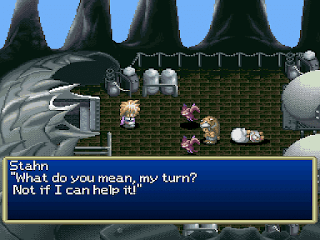 Genre: Action, Role-Playing (RPG)
Perspective: Bird's-eye view, Side view
Art: Anime / manga
Setting: Fantasy
Published by: Namco Hometek Inc.
Developed by: Wolf Team
Released: 1998
Platform: PlayStation (PSX, PS1)
The combat system is similar to that used in the previous game in the series, Tales of Phantasia. The battle takes place in a 2D location, where characters and their opponents move in real time. Melee and ranged attacks are also performed in real time; it takes time to cast spells, and the harder the spell, the longer it takes. When the spell is cast, the game is paused and the corresponding animation is displayed, as well as the damage inflicted. Characters can also perform special, more powerful attacks that consume Technical Points (TP) - analogous to mana in many other RPGs. In the Co-op battle mode, it is possible to play with four players through the PlayStation Multitap.
‹
›
Home
View web version