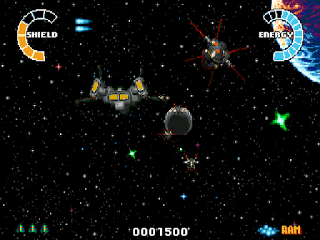 Genre: Action
Perspective: Behind view
Gameplay: Rail shooter, Shooter
Setting: Sci-fi / futuristic
Published by: Core Design Inc.
Developed by: Core Design Ltd.
Released: 1995
Platform: SEGA 32X
Soulstar X is a 3D Shoot'Em Up, but unfortunately it was never officially released as Sega had already stopped supporting many of its consoles, including the Sega 32X. For now, it remains for us to be content with only the prototype of the game. The game was planned to be a remake of Soulstar with a Sega Mega-CD for SEGA 32X. Therefore, the game almost completely copies it. There are minor changes in the interface and of course the graphics. There are only two levels in the game. In both of them, you will fly in the Treaghon spaceship as pilot Bryk Hammelt, trying to stop the world eater Myrkoids.
‹
›
Home
View web version