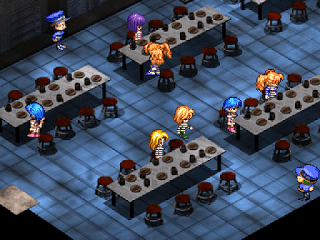 Genre: Role-Playing (RPG)
Perspective: Bird's-eye view
Art: Anime / manga
Pacing: Turn-based
Setting: Sci-fi / futuristic
Published by: Sony Computer Entertainment America Inc.
Developed by: Square Co.
Released: 1998
Platform: PlayStation (PSX, PS1)
This is the seventh game in the SaGa series and the first for the PlayStation. The series was traditionally directed and produced by the creator of the series, Akitoshi Kawazu. SaGa Frontier is set in a fictional sci-fi universe with fantasy elements, consisting of several worlds with their own culture, bizarre races, technology and magic. The player has the right to choose one of seven characters, and the entire subsequent story will describe his fate - each has its own separate plot with a unique chain of events. Unlike most Japanese role-playing games, the narrative develops nonlinearly and does not have a clear limited framework: from the very beginning, the player can freely move between worlds, communicate with a huge number of motley NPCs, and complete any quests at will.
‹
›
Home
View web version