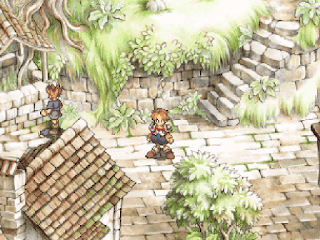 Genre: Role-Playing (RPG)
Perspective: 3rd-person
Visual: Isometric
Pacing: Turn-based
Setting: Fantasy
Published by: Square Electronic Arts L.L.C.
Developed by: Square Co.
Released: 2000
Platform: PlayStation (PSX, PS1)
The main character Gustave embarks on a long journey, which only his descendants can complete. Gustave (and possibly his descendants) and enemies perform various feats in caves, ancient towers, forests, etc. You can recruit a new ally somewhere in the tavern and go on adventures, making your way through difficult paths, looking for various secrets, meeting with guards, etc. At your disposal are weapons, spells and special attacks. Each type of weapon and spell has its own power (in points), and each character has its own number of Hit points, as well as Life points. A hit point is lost every time the HP level drops to zero. He also loses a point when he gets hit while fainting. But you can also replenish your standard of living somewhere in a safe place, usually in a city or hotel. This makes it possible to develop new attack strategies, methods of treatment and intensify searches and surveys in the depths of the dungeons. Very interesting is the little-known game system Generations System, which opens up great opportunities in role-playing games.
‹
›
Home
View web version