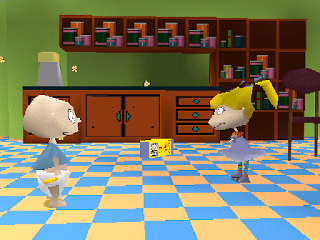 Genre: Action
Perspective: 1st-person
Gameplay: Puzzle elements
Published by: THQ Inc.
Developed by: n-Space
Released: 1998
Platform: PlayStation (PSX, PS1)
The game centers on the protagonist of the cartoon The Rugrats, Tommy Pickles, who has lost 11 of the 12 pieces of his puzzle depicting the T-Rex Reptar, a cartoon dinosaur. It is a 3D platform game that allows the gamer to control different characters from the animated series to achieve the ultimate goal of assembling the Dinopuzzle. The video game has fourteen levels that can be started by the player by picking up a certain object (such as an umbrella or a box of cookies). The gamer can play the levels in any order, but the most challenging will only be unlocked by playing. Tommy and the other children will have to search for the pieces of the puzzle everywhere, from the backyard to the Milky Way.
‹
›
Home
View web version