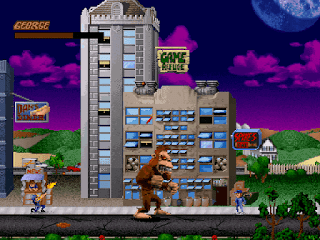 Genre: Action
Perspective: Side view
Visual: 2D scrolling
Gameplay: Arcade
Published by: Midway Home Entertainment
Developed by: Game Refuge Inc.
Released: 1997
Platform: PlayStation (PSX, PS1)
The second game in the Rampage series, originally released by Midway for arcade machines.
George and the company we already know are free after the explosion at the Scumlabs factory that created them. They begin to smash corporation bases around the world and exterminate their personnel. In the final levels of the game, the leader of the corporation, Eustace DeMonic, also turns himself into a monster, intending to kill George, Lizzy and Ralph, but is defeated in a battle at the lunar base. The last surviving employee, Dr. Elizabeth Veronica, tries to fry the monsters with a ray cannon, but she only manages to shrink them, thereby allowing them to climb into her ship.
As in the first game, your goal is to demolish all buildings on the map in order to reach the next level, but the military prevents you from calmly doing what you love. If you miss the time, then the buildings are destroyed by bombs, and you do not get points for them. In this part, there is a notable power-up - radioactive debris that turns your character into a super-monster V.E.R.N.
You can control your movement around the world. The tourist billboards you see correspond to different regions of the country; destroying the sign showing the region will carry your charges into it. Likewise, you can pick up or leave the World Tour power-up and choose another country to visit. The purpose of each of these visits is to destroy the Scumlab base following the level chain. The game will not end until all bases are found and destroyed.
‹
›
Home
View web version