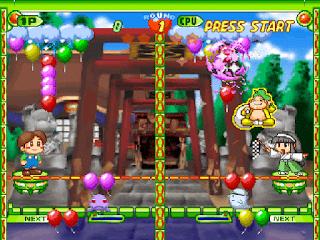 Genre: Puzzle
Perspective: Side view
Visual: Fixed / flip-screen
Pacing: Real-time
Gameplay: Tile matching puzzle
Published by: Taito Corporation
Developed by: Dreams Co, ITL Co.
Released: 1998
Platform: PlayStation (PSX, PS1)
The gameplay of the game can be described as a hybrid of Puzzle Bobble, Arkanoid and Space Invaders. Under the clouds are placed rows of colored balloons, which advance towards the lower part of the field where an imaginary line is marked (if it is exceeded it will be game over), and the player must continuously throw balloons at his disposal at them. When three of the same color come into contact (even if only two by two) they burst. Halfway between the line and the downward balloons, you will see a balloon of a different color pass from left to right or vice versa, with which the player can take advantage of it to let it go towards the lines by hitting it with his two balloons, often in order to earn additional points. Furthermore, by continuing to accumulate points, a balloon-shaped container will be filled, located in the side parts of the screen, where for that particular color, one of the three special balloons is obtained in the supply. They are distinguishable by symbols: with the clock that will block the clouds for five seconds, with the arrow pointing upwards that will move the clouds up a few steps, and with the rainbow that turns the balloons into that color. close to the burst.
Characters
The original version of Pop'n Pop featured a cast from previous Taito games, such as Rainbow Islands, Kiki KaiKai, Don Doko Don and The NewZealand Story, while others were added to the console ones (also by Taito) , such as Bubblun from Bubble Symphony, Ptolemy from The Fairyland Story, Chack'n from Chack'n Pop, Hipopo from Liquid Kids, and Drunk from Bubble Bobble. The last three are secret in the PlayStation version, but immediately playable in the Game Boy Color version.
‹
›
Home
View web version