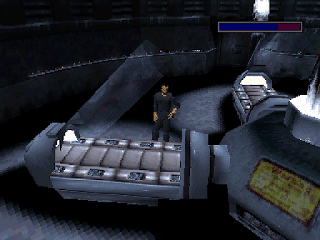 Genre: Action
Perspective: 3rd-person
Gameplay: Puzzle elements, Survival horror
Setting: Cyberpunk / dark sci-fi, Sci-fi / futuristic
Published by: Electronic Arts
Developed by: Riverhill Soft Inc.
Released: 1997
Platform: PlayStation (PSX, PS1)
You have awakened from cryogenic sleep at the B-4F level of the research center. You have very little time to escape the deadly cold. In this game you control three characters (the Active Player Change System): a man, a woman and a robot with various abilities, without the full use of which it is simply impossible to complete the game and solve the puzzles that come your way. As with most games of this kind, special attention must be paid to the objects encountered. Among them you will find secret maps, computer chips, weapons - all this will come in handy as you move through 80 perfectly executed levels-locations. I would like to highlight two features of Overblood. First, this game is not just an adventure game. It includes numerous fights with various monsters, which will not allow you to relax even for a minute. Also, you are given the opportunity to fully reveal your dormant gaming abilities, passing through the numerous mini-games that are an integral part of Overblood. Secondly, the use of three cameras, changing the point of view, will allow you to see more fully all the details of the virtual world into which you are immersed, by turning on this game.
‹
›
Home
View web version