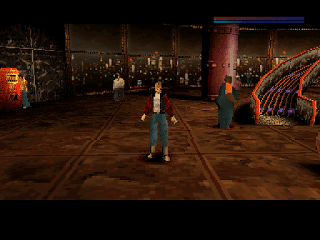 Before swap CD, save state to file, next CD, upload save state file.
Genre: Action
Perspective: 3rd-person
Gameplay: Puzzle elements
Setting: Cyberpunk / dark sci-fi, Sci-fi / futuristic
Published by: Riverhill Soft Inc.
Developed by: Riverhill Soft Inc.
Released: 1998
Platform: PlayStation (PSX, PS1)
Twenty years have passed since the first Overblood, twenty terrible and terrible years. It was 2115. People have almost completely calmed down and began to live as before. But suddenly a new deadly threat looms over your world. The second part of this game is already presented on two discs. Really real action and great graphics are waiting for you. Each character now has their own moves and techniques. The developers took into account the criticism of the first part because of the small number of monsters. Now you can destroy as many as 70 different types of monsters. If it is hard and scary for you, your faithful friend Lars, who has aged, but remained in the same combat form, will come to your aid. For the most part, you will be in various caves, but this does not diminish the interest in the game. Overblood II is a game that will keep you hooked for a long time.
‹
›
Home
View web version