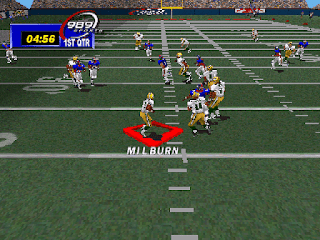 Genre: Sports
Perspective: Bird's-eye view
Visual: 2D scrolling
Sport: Football (American)
Published by: Sony Computer Entertainment America Inc.
Developed by: 989 Studios
Released: 1998
Platform: PlayStation (PSX, PS1)
Three game modes - separate matches, the "full" 1998 season and its "playoffs". There is a license from the NFL, therefore, only those that participated in the mentioned season are represented among the teams, and the names of their players correspond to reality. But here, for example, a collection of tactical formations - the so-called "plays" - here is one, and not for the team, but for the whole game (that is, no matter which team you took, the options for these very schemes will always be the same ). It should be noted that the gameplay itself here is, of course, to a certain extent arcade, but the degree of skill of the computer opponent deserves applause, especially in relation to the actions of the "defense team" (one of the three parts of a team in American football), skillfully adapting to our style. It should be noted that there is a relatively wide variety of available techniques and movements: models jump, spin, spin, fall, use various types of punches, and so on. But, unfortunately, the implementation of the "work" of the members of the "special team" (the same kickers, for example) was not done very well: for example, in the reviews of the game, the impossibility of changing the line of players hitting the punt (a specific type of blow in football, when the ball is thrown to the ground and then kicked out before it hits the lawn).
The most important point is the choice, if I may say so, of the way of passing: "standard" and "coaching". With the first, everything is obvious: we directly direct the actions of athletes on the field; but the second, apparently, is intended for those who dislike actions "on reflexes", but who at the same time like to think - therefore, it involves only a consistent choice of "plays" - and observation of the implementation of their "ideas" carried out by artificial intelligence. Other settings include the choice of the general level of difficulty, weather conditions, the presence or absence of the risk of injury to players (it is worth noting that if this option is activated and we are playing a season or "playoffs", then the injured athlete may be "unavailable" for a very long time time), as well as warnings and punishments for breaking the rules; in addition, you can determine the actual length of the period of the match, called the "quarter" (in real American football, it is equal to fifteen minutes).
‹
›
Home
View web version