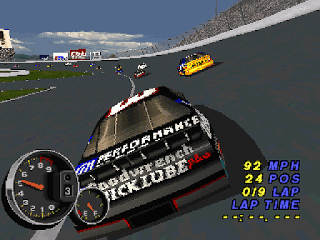 Genre: Racing / driving
Perspective: 1st-person, Behind view
Vehicular: Automobile, Track racing, Vehicle simulator
Published by: Electronic Arts
Developed by: Stormfront Studios
Released: 1998
Platform: PlayStation (PSX, PS1)
The phenomenal success and popularity of the NASCAR series confirms the correct racing game concept chosen by EA Sport. The new championship will take place on 18 stunning tracks: from super-fast highways to dirt roads and short tracks. Drivers include stars such as Dale Earnhardt, Leff Gordon, Mark Martin, Dock Trickle, Terry Labonte and Ricky Rudd, as well as last season's heroes Richard Petty, Cale Yarborough and a number of others (about 31 riders in total). For the first time in a NASCAR game series - Night Racing! Particular attention is paid to the sound design of the game. The deafening roar of engines, the squeak of the brakes, the crash of collisions were recorded directly at the races and create an amazing effect of presence. Also, two commentators conduct the races very nicely, they have a connection with the team chief, provide information about incidents, the remaining fuel and the condition of the tires, as well as about everything else that is happening on the track and around it.
‹
›
Home
View web version