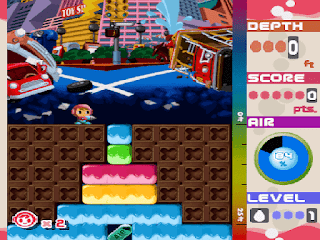 Genre: Action, Puzzle
Perspective: Side view
Visual: 2D scrolling
Gameplay: Platform
Interface: Direct control
Setting: Fantasy
Published by: Namco Hometek Inc.
Developed by: Namco Limited
Released: 2000
Platform: PlayStation (PSX, PS1)
Tetris ideas live and win! This, once again, is proved by the game Mr. Driller Playing as Mister Driller you fight your way into the underworld through colorful bricks. In addition to the colored ones, there are just bricks that require additional efforts. Destroying blocks you move forward (down), some of the blocks disappear after merging with other blocks of the same color. In general, everything is as usual, but ... you are limited by time (otherwise, in Tetris it ...), the collapse of the upper blocks (if they do not connect with bricks of the same color) and lack of air (Driller, after all). With the first and second, it is clear - there is no time - we are in a hurry, the blocks fall - we dodge, with respect to the third - we are looking for special oxygen bags with the inscription Air, without them there is nothing. Traditionally (for Namco) there are several modes in the game, Co-op, Against Each Other, Story and Arcade Mode and some other bonuses. Playful music, bright colors, commentary - all this fits perfectly into the game. The game unexpectedly acquired a mass of fans, which prompted the creators to sequel, the game Mr. Driller G, as well as porting the original game to PC and other platforms.
Whatever it was, this game also has a plot, it is as follows: Somewhere in the 21st century, amazing events took place in Japan. As if "invasion" of floating blocks. However, a professional driller named Susumu Hori managed to prevent this terrible disaster, and peace reigned on the surface of the Earth again. However, very little time passed, and a new catastrophe broke out. Mystical blocs "flooded" America, India and Egypt, three giant countries at once. Susumi Hori and his main rival, the famous Rival Driller by the name of Anna Hottenmeyer, urgently began to drill deep into the earth, while Susumi's father Taizou Hori, the older brother of Susumu Hori (Anna's assistant), the robot Hotinger Z, and also a favorite Susumi, a dog named Puchi, was desperately drilling the ground, trying to break through to the right depths and liquidate the nightmarish disaster. Where did these blocks come from, what is the cause of this catastrophe, and which of the six famous drillers will be able to prevent the death of the Earth?
‹
›
Home
View web version