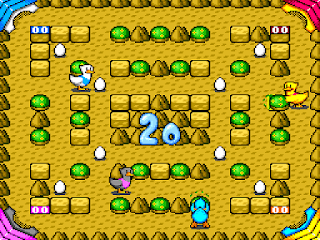 Genre: Action
Perspective: Top-down
Published by: Tokuma Shoten Intermedia Inc.
Developed by: Naxat Soft
Released: 1997
Platform: TurboGrafx-CD (PC Engine)
The game was released as a free addendum to Super PC-Engine Fan Deluxe Vol. 2. Similar of course to Bomberman, but still strikingly different in gameplay.
You control a cute duck. Your duty is to wander through the maze, collecting eggs and all sorts of bonuses. When chickens hatch from the eggs, they run home, bringing you bonus points (which you then need to measure against friends or computers). Be sure to do something wrong with other players (otherwise it will be boring). The game consists of three worlds, each with 10 stages.
‹
›
Home
View web version