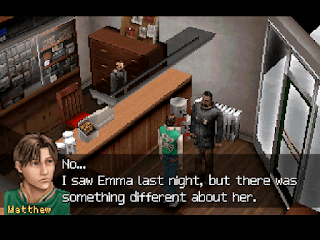 The player has seven days to explore the city and countryside. At this time, you need to talk with the locals to unravel the mystery. One hour of play is about five minutes in real time.
Due to the strict seven-day limit, it is difficult for the player to see all the events and get the best of the three possible endings. The player can save the game by sleeping for one or five game hours. The game has a "tank" movement control system, known for Resident Evil. The game also features a full weather cycle, and residents of the city have an individual daily routine.
The player has access to a Volkswagen Beetle and a boat to quickly navigate the city. Matthew can eat at local eateries, and his car needs fuel to drive. Matthew can also use his cell phone to make calls to other characters and businesses in the city.
‹
›
Home
View web version