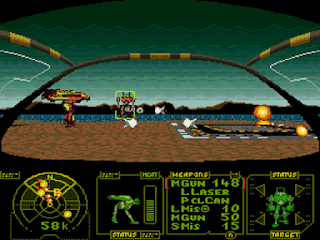 Genre: Action
Perspective: 1st-person
Vehicular: Mecha / giant robot, Vehicular combat
Setting: Sci-fi / futuristic
Published by: Activision
Developed by: Beam Software Pty.
Released: 1993
Platforms: Super Nintendo (SNES), DOS
The main character is a mech pilot named Herras, whose family was killed by the military rebels "The Dark Wing Lance". Herras decided to take revenge on them and track down the rebel leader. At the end of the game, he hunts down and kills members of the Dark Wing Lance and avenges his family's death.

The gameplay can be described as a mech simulator. The player will have to control the Battle Mech - a multi-ton robot. During the game you will have to complete story missions, fight with many opponents on various worlds of the fictional Battletech universe throughout the game, the player must repair and equip his mech, he can also improve it and its weapons.

The game contains unique mechs designed specifically for her. There are a total of 8 'Mechs available - 4 Light, 2 Medium, Heavy, and Assault Mech. It is possible to completely change the equipment of the fur - armor, engines, weapons and additional devices.
‹
›
Home
View web version