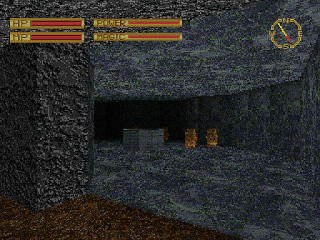 Genre: Action, Role-Playing (RPG)
Perspective: 1st-person
Setting: Fantasy
Published by: FromSoftware
Developed by: FromSoftware
Released: 1994
Platform: PlayStation (PSX, PS1)
Players navigate the five dungeon environments, which are rendered using real-time 3D graphics. During exploration, the player finds keys and items that can open doors and activate portals to allow travel to different levels of the dungeon. Maps can also be discovered to aid navigation Enemies are found in the dungeon environment, and battles take place in real time. Players can use a melee attack with their equipped weapon and a magic attack. Both melee and magic attacks deplete dedicated stamina meters, with no further actions possible until the meter has been filled again. Different weapons and other items such as non-playable character (NPC) shields and armor can be purchased or found in chests during dungeon exploration.

The game takes place in the medieval land of Verdite, which was once terrorized by evil powers. In ancient times, evil was defeated by a hero later nicknamed the Dragon. After his victory, the Dragon disappeared and became known as a legend, with a cathedral built in his honor in the woods where his exploits took place. During the events of the game, the land has fallen prey to the forces of evil once again, and the locals' only hope is a prophecy that the Dragon will return. 2 3 The protagonist of King's Field, the royal heir John Alfred Forester, arrives at the infested monastery in search of his father, who led a squad of soldiers to the catacombs below the monastery cemetery. Making his way through the catacombs, Forester meets the elf Miria, who realizes that the King of Verdite, Reinhardt III, has gained dark power. Descending deeper into the catacombs, Forester learns that Reinhardt II poisoned his brother, Reandalf VIII, who has been resurrected by the dark power, and that his own father died defeating Reinhardt's black knight's guardian. III. Retrieving the hereditary Dragon Sword from his father and slaying the dark wizard who creates the monsters, he meets again with Miria and her master, the dragon god Guyra, who grant him the power to kill Reinhardt III and seal the "door of darkness. ", a portal opened by Reinhardt's cursed line so they could rule the world. Forester confronts and kills Reinhardt III transformed by demons. Hailed as a hero, Forester becomes the new king.
‹
›
Home
View web version