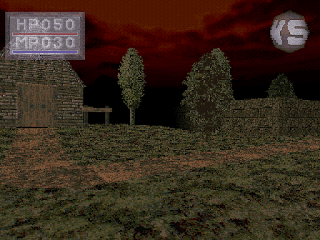 Genre: Action, Role-Playing (RPG)
Perspective: 1st-person
Setting: Fantasy
Published by: ASCII Entertainment Software
Developed by: FromSoftware
Released: 1996
Platform: PlayStation (PSX, PS1)
Released a year earlier RPG - Kings Field was widely regarded as very uneven (to put it mildly) in its merits. Unfortunately, its sequel, Kings Field II, suffers from a lot of old flaws. The developers, of course, put some marafet on, but the slowness of movement, the fuzziness of the control system and the protractedness of the game action remained as they were. The action is so slowed down that all the characters move as if under water, and even with a minor character it takes about five minutes to fight. Your character's defense is also ineffective: some skeleton is capable of hitting you with one single blow, while you need three or four hits to knock him down. The visuals and soundtrack of the game have been improved to a greater extent.
In Japan, the game is published as Kings Field III, because English-speaking players have been familiar with the game since the second part of the game, which is published in Europe as Kings Field I.
‹
›
Home
View web version