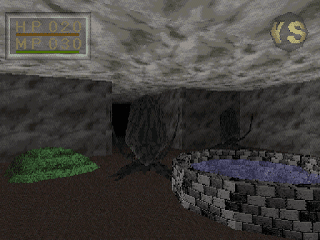 Genre: Action, Role-Playing (RPG)
Perspective: 1st-person
Setting: Fantasy
Published by: ASCII Entertainment Software
Developed by: FromSoftware
Released: 1996
Platform: PlayStation (PSX, PS1)
A typical role-playing game (RPG), which is made according to a fantasy storyline using all the technical capabilities of the PlayStation, which makes it just great! The plot is fairly common in this genre. Sometime in distant times, the elves discovered an island called Melanath and began to build a temple on it. At the end of the construction, monsters appeared from the ground and destroyed everyone. Some elves died from an unknown poison. Thousands of years later, people decided to rebuild the temple, but the curse that remained on the island caused underground monsters again. In addition, they became more insolent and more aggressive - they began to attack neighboring countries. To defend against the raids of evil spirits, the king of a neighboring country named Alfred tried to get rid of them with a magic sword, but he was kidnapped. The best friend of the king, called Alexander (this is your hero), goes in search of the sword.
The game takes place in a huge, multi-tiered labyrinth, with many enemies, items and adventures. You will visit the surrounding islands, villages, explore the depths of the sea and even another dimension. All this time you will have to fight for life with arms in hand. The killed enemy will leave behind something useful, and possible friends (villagers) will give useful advice in exchange for help.
3D polygonal graphics make the game extremely realistic, which once again emphasizes the capabilities of the PlayStation. The music is also fully consistent with the nature of the game, so that you constantly feel the hidden danger and feel like a medieval knight. It is worth noting that the game is quite difficult, so patience and ingenuity will not hurt you.
‹
›
Home
View web version