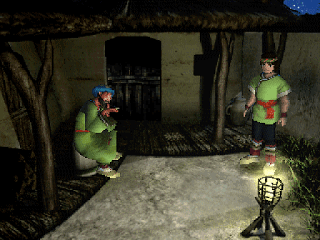 Genre: Role-Playing (RPG)
Perspective: 3rd-person
Pacing: Turn-based
Published by: Crave Entertainment
Developed by: Genki Co.
Released: 1999
Platform: PlayStation (PSX, PS1)
You play a young Levant, following in the footsteps of his disappeared father and dreaming of becoming a Cocoon Master village elder. To fulfill your mission, you have to master the use of magical cocoons to capture, pacify and train the monsters that inhabit the four surrounding forests. These monsters are essential to save the people of Syrus from the Onibubu invasion. This is not an easy task at all, especially since the locals whom you are trying to save accuse you of all mortal sins.
In most traditional role-playing games, you collect your fellow companions in the course of the game, and here you yourself build your company from tamed monsters. In the course of the game, you will meet over 150 different monsters, they are divided into four main "squads": earth, wind, fire and water. It is imperative to learn how to breed these elements in order to create huge and powerful allies. Since you can only have three allies at a time, you need to grow them very carefully. You can memorize your pets, and then use it in Arena Mode in battles with friends, more precisely, with their monsters.
The only, but rather significant disadvantage of the game is that in practice monsters are not so diverse both in appearance and in combat characteristics, and the gameplay itself is rather boring (which is typical for most role-playing games) and comes down to walking around the neighborhood and frequent fights with monsters for the purpose of their subsequent domestication and crossing, or just for sale, because this is the main source of income for our hero. But nevertheless, the game is quite exciting and partially resembles (in this aspect) the games of the Digimon or Pokemon series, and you may simply be carried away by the possibility of collecting bridges with the names that you come up with.
The undoubted plus of the game is the magnificent full-scale graphics, as well as excellent sound and a simple, effective control system.
‹
›
Home
View web version